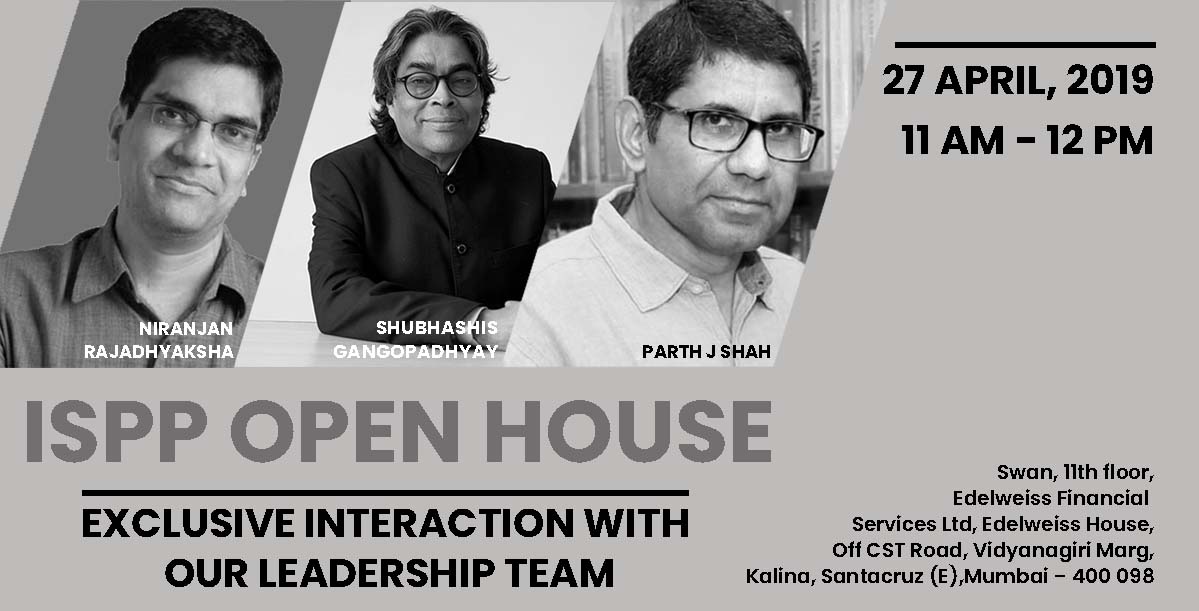 The Indian School of Public Policy (ISPP), the first School in India offering a one-year postgraduate programme in Policy, Design & Management, is organizing an ‘Open House’, in Mumbai, on 27 April, 2019.

The event will serve as a valuable platform to meet and interact the leadership team of the ISPP – Dr. Parth J. Shah, Mr. Niranjan Rajadhyaksha and Prof. Dr. Shubhashis Gangopadhyay, along with current and future policymakers. 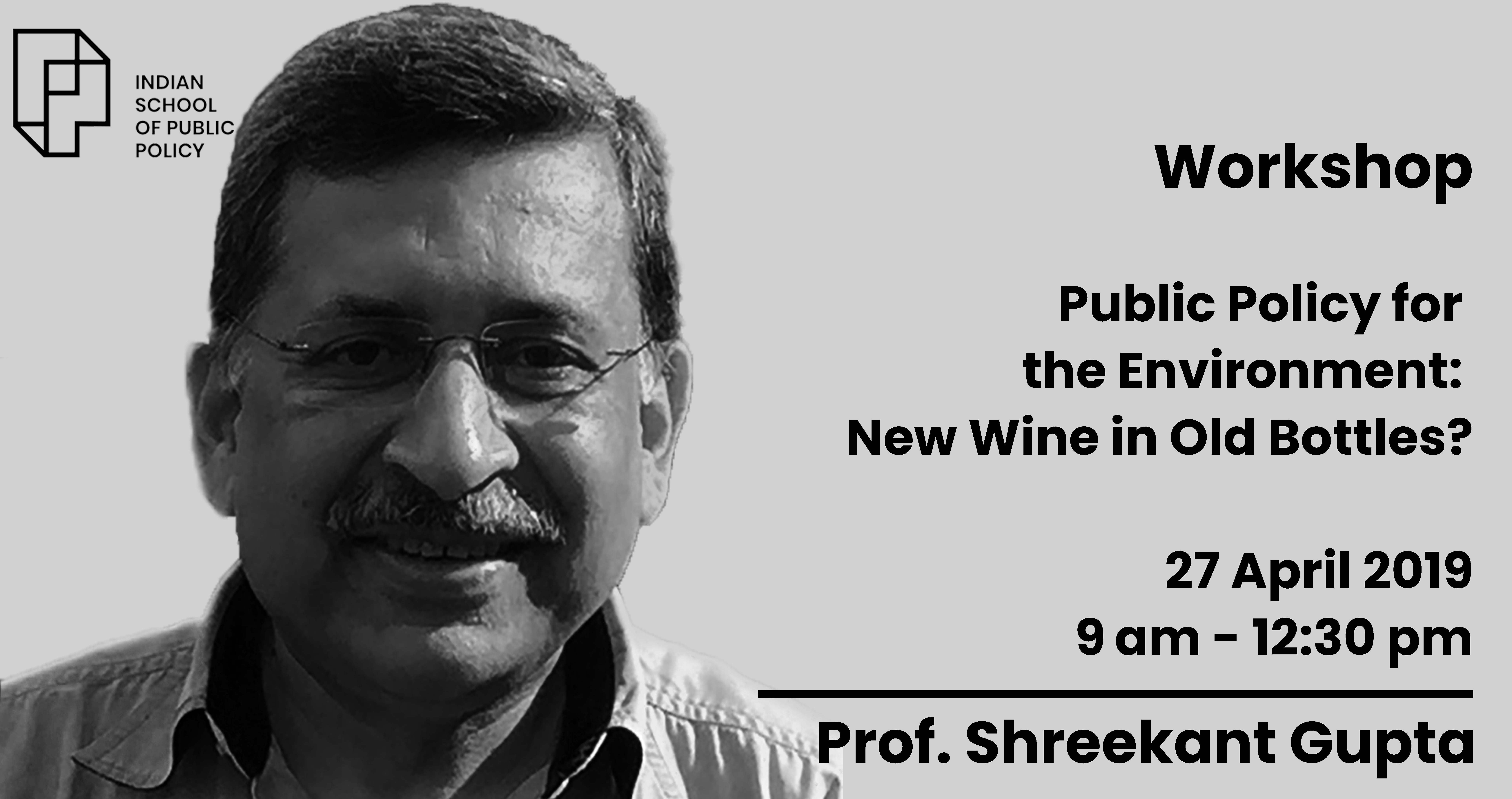 Prof. Gupta, who is also the Vice-President of the Indian Society for Ecological Economics, and has served as the Director – National Institute of Urban Affairs, began the workshop with a synopsis of the environmental challenges India is facing, specifically covering water, air, soil, among others. In subsequent stages, he talked about the existing legislations/standards in India, market approach towards environmental problems, environmental economics, and other interesting facts and figures that served as food-for-thought.

Concluding the workshop, Prof. Gupta mentioned, “Top-down regulatory approaches and judicial diktats have failed to reduce air and water pollution. It is time to consider market approaches such as pollution fees and emissions trading that are being used world over.”

Shreekant Gupta is Professor of Economics at the Delhi School of Economics and Adjunct Professor at the Lee Kuan Yew School of Public Policy, Singapore. He is also Vice-President of the Indian Society for Ecological Economics. His teaching and research interests are in environmental economics and policy including climate change. His policy experience is as Director National Institute of Urban Affairs and as environmental economist at the World Bank, Washington DC. He got his PhD in economics from the University of Maryland and was Fulbright Fellow at Massachusetts Institute of Technology. 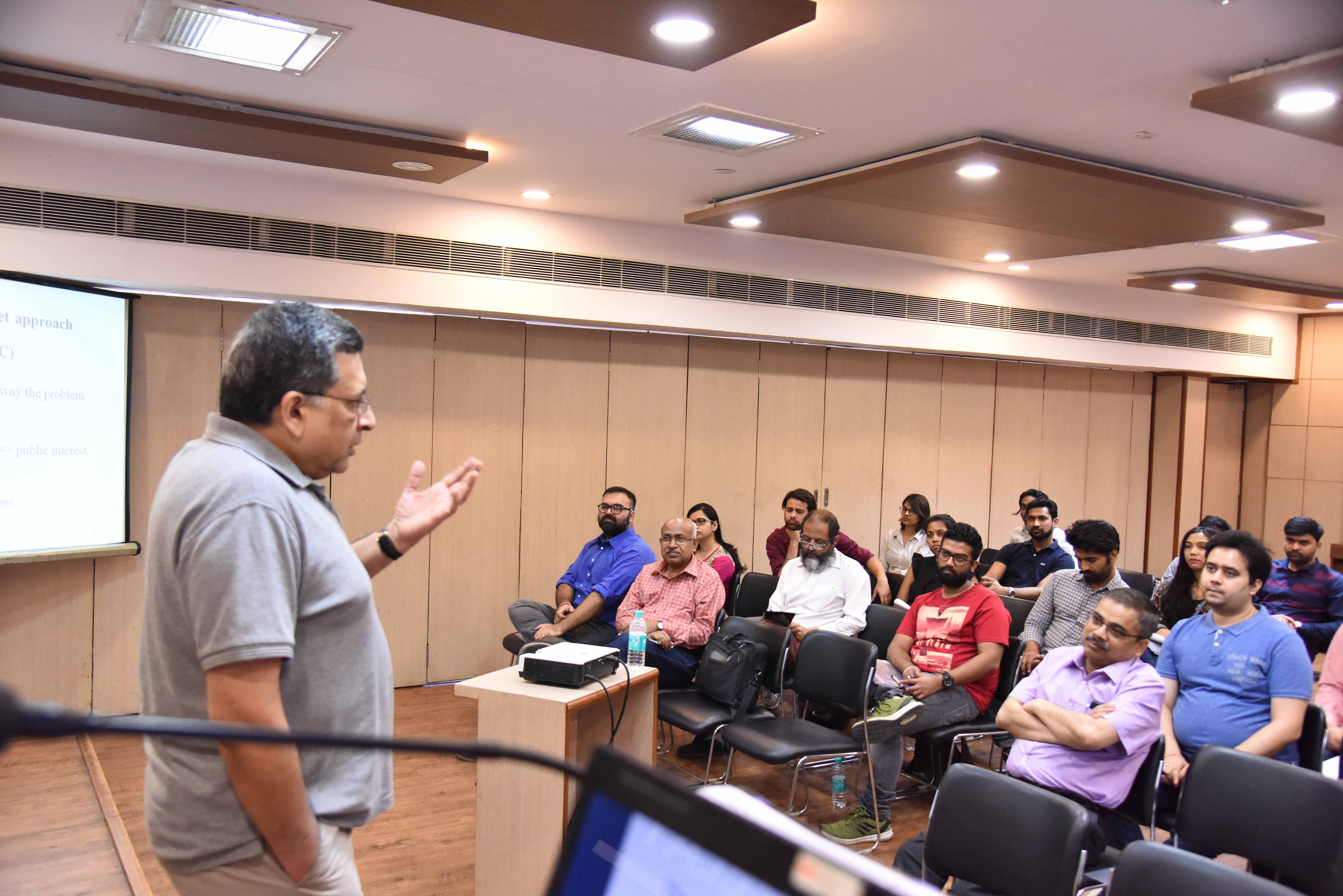 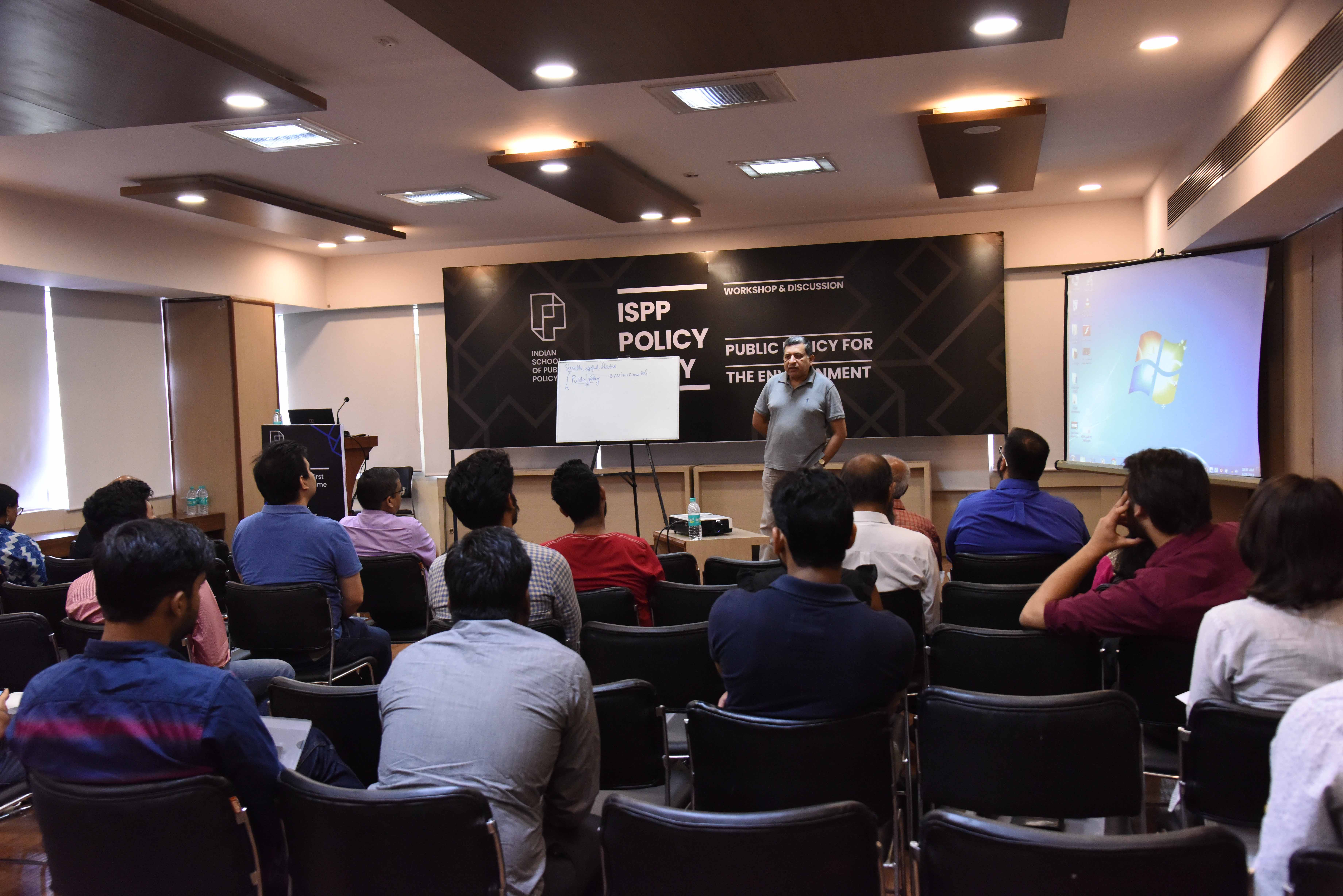 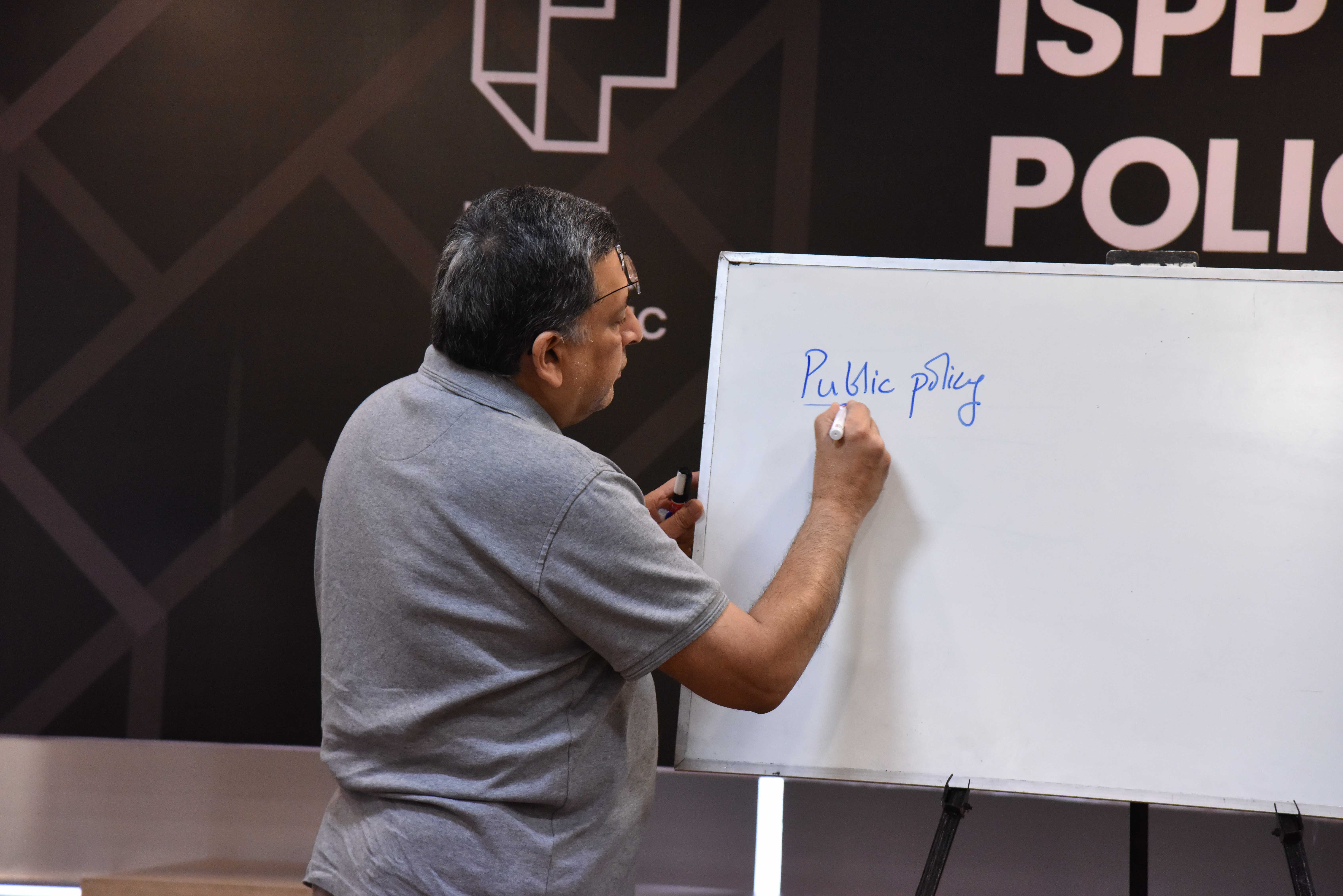 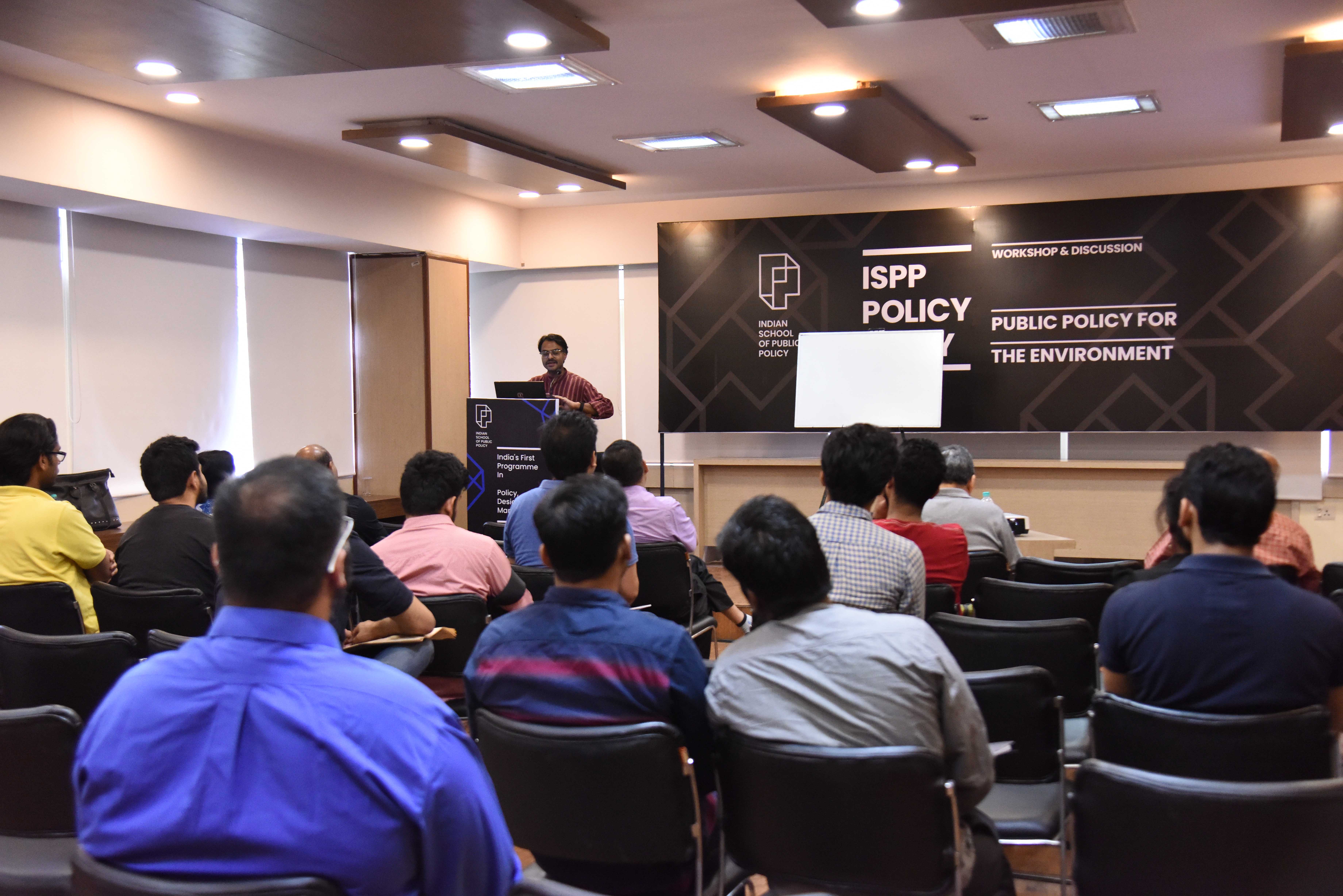 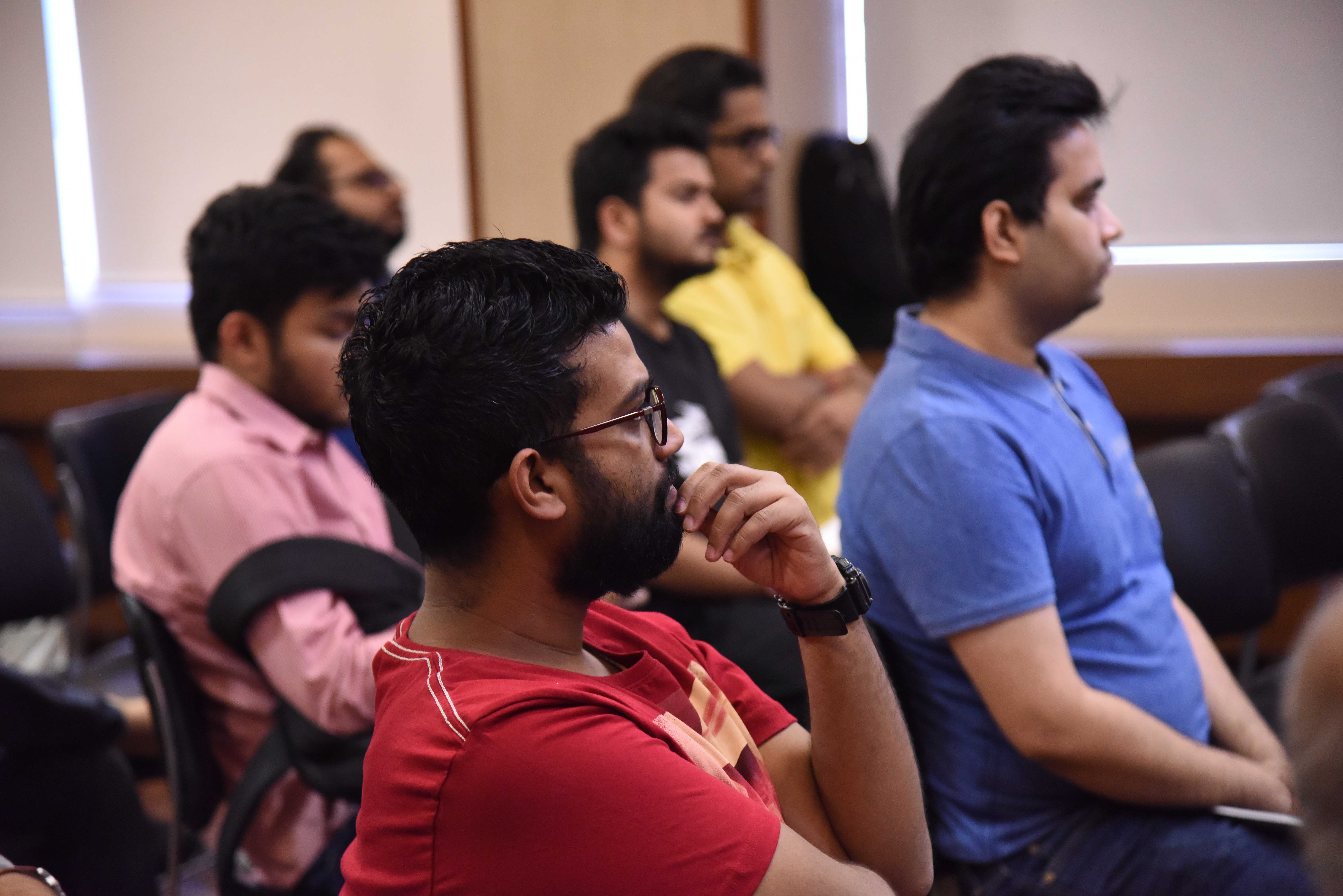 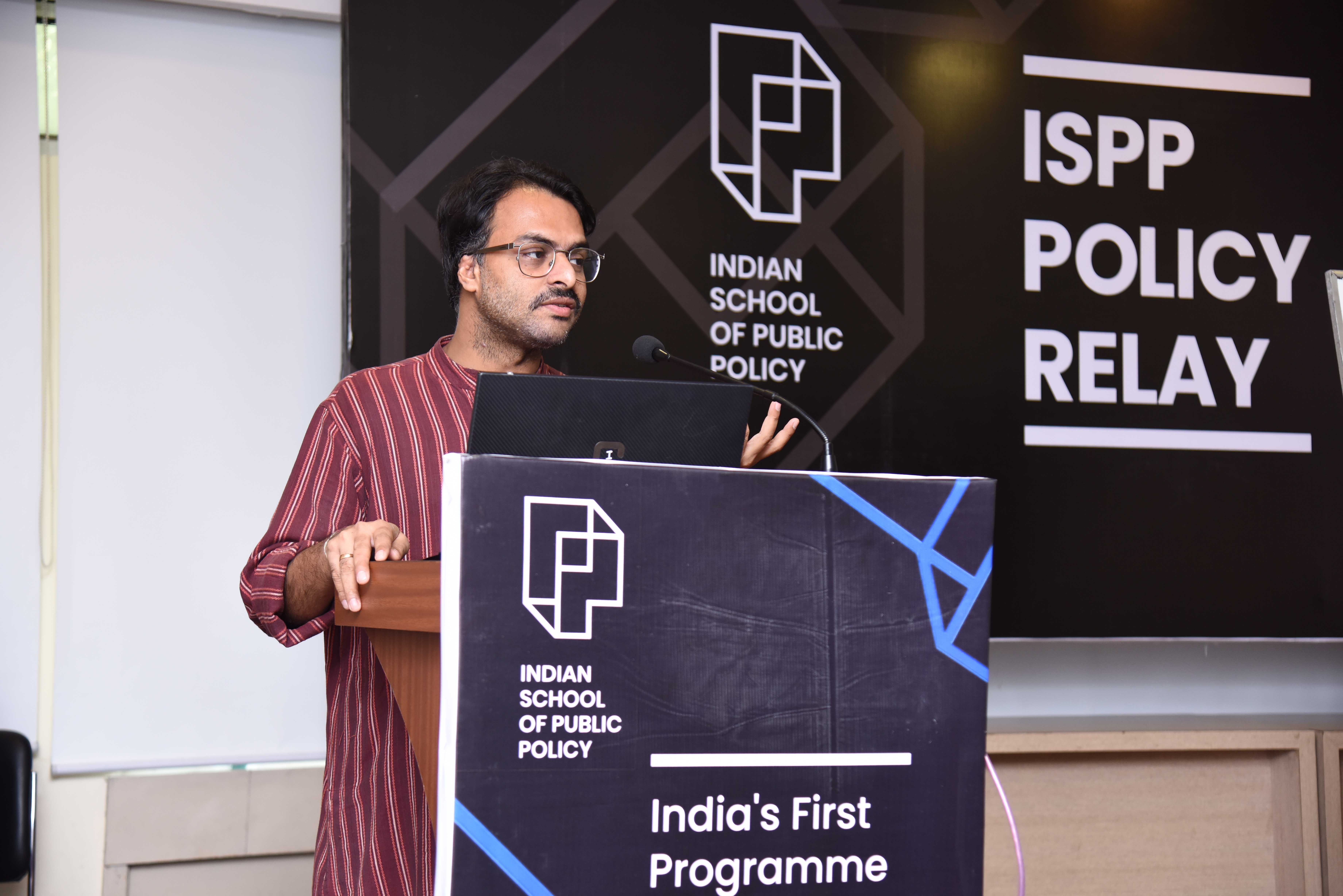 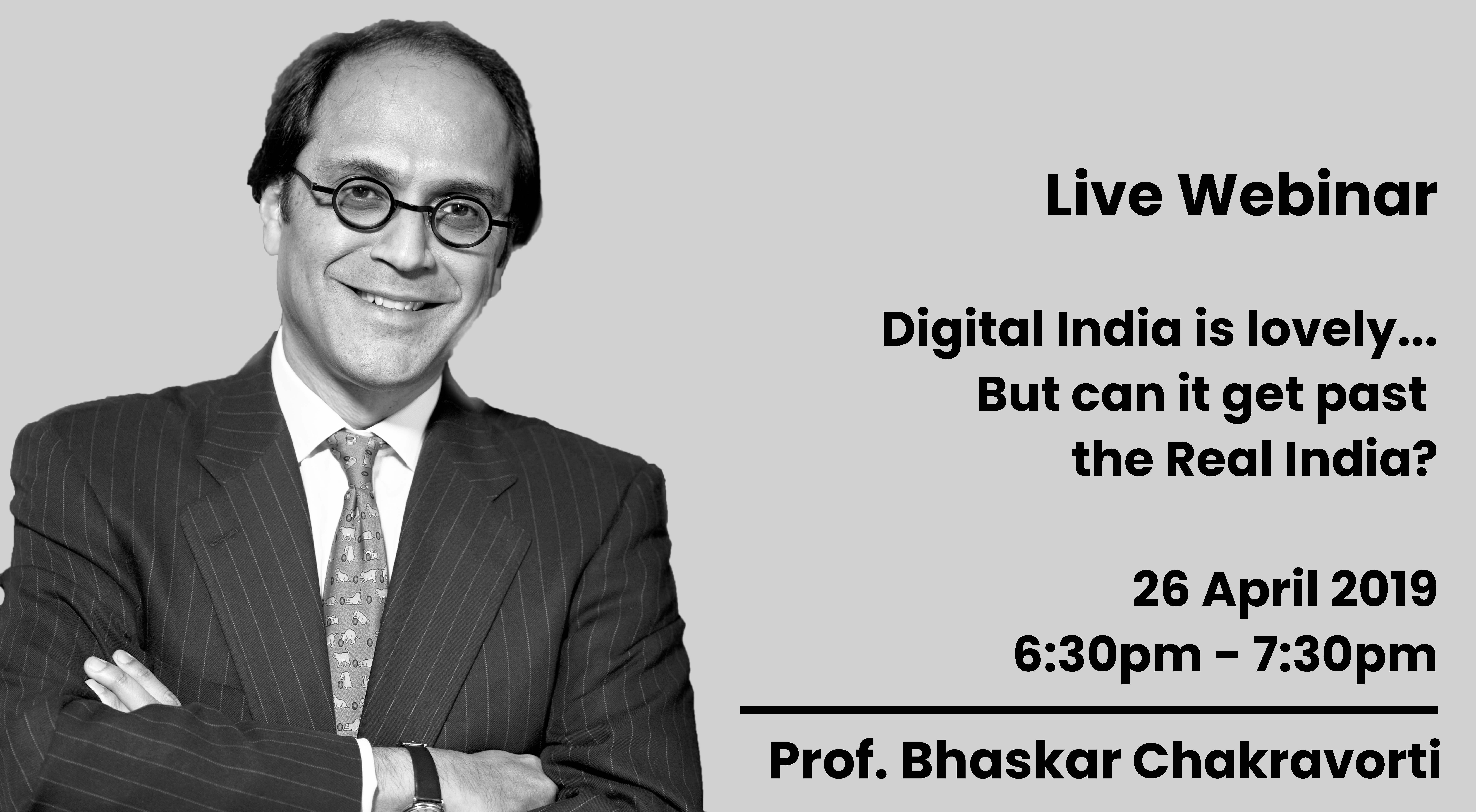 ISPP is organizing a webinar with Bhaskar Chakravorti on the topic Digital India is lovely! But can it get past the real India?

Title: Digital India is lovely! But can it get past the real India?

India is the world’s fastest growing large economy. It is also one of the world’s hottest digital destinations. In the meantime, the government has also made digitization of the country a priority – a process that has progressed in fits and starts. This raises many questions: How has India been performing in its digital evolution relative to the rest of the world and relative to its peers? How is it doing in accumulating data as the fuel that might drive the coming generation of an AI-led digital economy? What is the state of digital trust in India? How inclusive is the state of digital uptake in India?

Bhaskar Chakravorti is the Dean of Global Business at The Fletcher School at Tufts University and the founding Executive Director of Fletcher’s Institute for Business in the Global Context.

The Institute’s mission is that of “connecting the world of business with the world,” exploring issues at the intersection of business and global context, including geopolitics, security, development and the human condition. Bhaskar serves on the Fletcher faculty as Professor of the Practice of International Business and is the Chair of the Council on Emerging Market Enterprises. He also served on the Global Future Council on Innovation for the World Economic Forum and is Senior Fellow (non-resident) at the Brookings Institution India, Senior Advisor for Digital Inclusion at the Mastercard Center for Inclusive Growth and on the Advisory Board of the UNDP’s Center for Private Sector in Development.

Prior to joining Fletcher, Bhaskar was a Partner of McKinsey & Company, a Distinguished Scholar at MIT’s Legatum Center for Development and Entrepreneurship and on the faculty of Harvard Business School and Harvard University Center for the Environment. He was a leader of McKinsey’s Innovation and Global Forces practices, served on its Knowledge Services Committee and taught innovation and entrepreneurship at Harvard. In a 25+ year career, he has been an advisor to CEOs, senior management and Boards of over 30 companies in the Fortune 500 and worked across the Americas, EU, Asia and Africa, and multiple industries. He is the author of the Amazon best-selling book, “The Slow Pace of Fast Change: Bringing Innovations to Market in a Connected World” (Harvard Business Press) and is the creator of the widely-used Digital Evolution Index. His papers and articles appear in top-tier academic journals, multiple books and in widely-read media, e.g., Harvard Business Review, New York Times, Wall Street Journal, Financial Times, Washington Post, CNN, Foreign Affairs, Newsweek, Businessweek, among many others. He was a former columnist on innovation for the Washington Post and currently has regular columns in Forbes, Harvard Business Review, the Indian Express and Anand Bazar Patrika; he is regularly interviewed by the press, and has appeared in a wide variety of leading media, including New York Times, Wall Street Journal, Financial Times, NPR, The Economist, New Yorker, CNBC, CBC, CCTV, Times of London, Al Jazeera, Economic Times, Times of India, among many others.

Bhaskar’s prior appointments were as a Partner and Thought Leader at the Monitor Group, a game theorist at Bellcore (formerly Bell Labs), assistant professor at the University of Illinois at Urbana-Champaign and TAS (the Tata Group’s “talent pipeline for leaders”). His PhD in economics is from the University of Rochester, where he was a University Fellow. He is a graduate of the Delhi School of Economics and in economics with honors from Delhi University’s St. Stephen’s College. 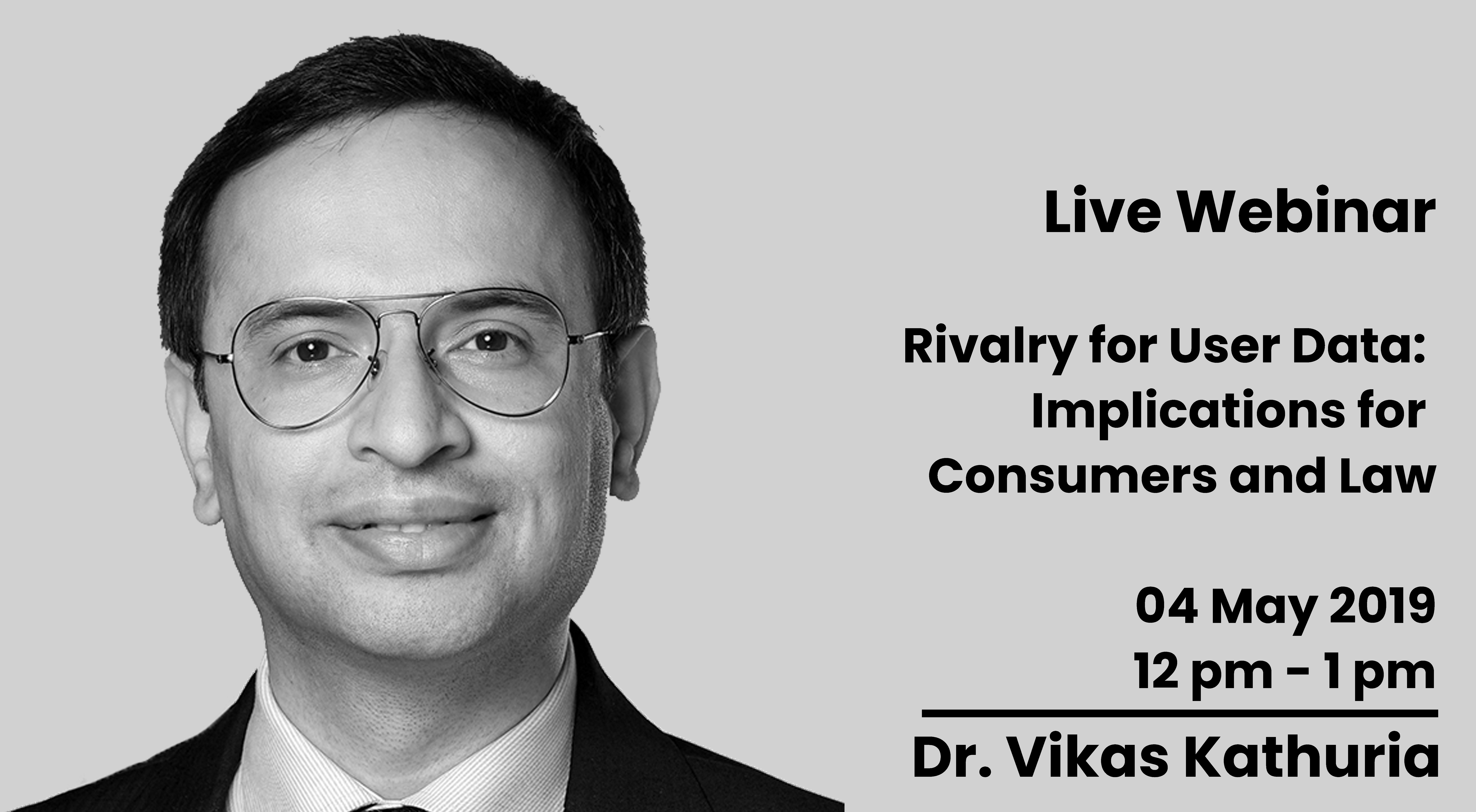 ISPP is organizing a webinar with Dr. Vikas Kathuria on the topic Rivalry for user data: Implications for Consumers and Law.

Title: Rivalry for user data: Implications for Consumers and Law

Dr Vikas Kathuria is Senior Research Fellow at the Max Planck Institute for Innovation and Competition, Munich. He researches and writes on competition law and regulation in the data-driven markets. Vikas earned his PhD from the Tilburg Law & Economics Center, the Netherlands. His PhD thesis investigated the role of competition law in fostering innovation in emerging markets. Vikas has previously worked with the Competition Commission of India (CCI) and has also taught at the Jindal Global University and the Bennett University. His research papers have appeared in international peer-reviewed journals.

Artificial Intelligence driven algorithms are redefining businesses in the marketplace. Players such as Facebook, Google, and Amazon employ the power of AI in their businesses. In the Artificial Intelligence ecosystem, access to user data is the key determinant of success for firms. The user data gives critical insights about user behavior and allows for more precise predictions. Disease diagnosis, face recognition, harvest yield predictions and also behavioral targetting of advertisements are just a few examples of AI-driven innovations that define Industry 4.0. It is, therefore, natural that firms will compete for users’ personal data. Not only this rivalry may compromise users’ privacy, but it may also result in nuanced anticompetitive behavior. The purpose of this talk, therefore, is to introduce the audience to the rising importance of big data, its implications for their privacy, and the anticompetitive behavior that harms consumers and poses challenges to the policymakers. 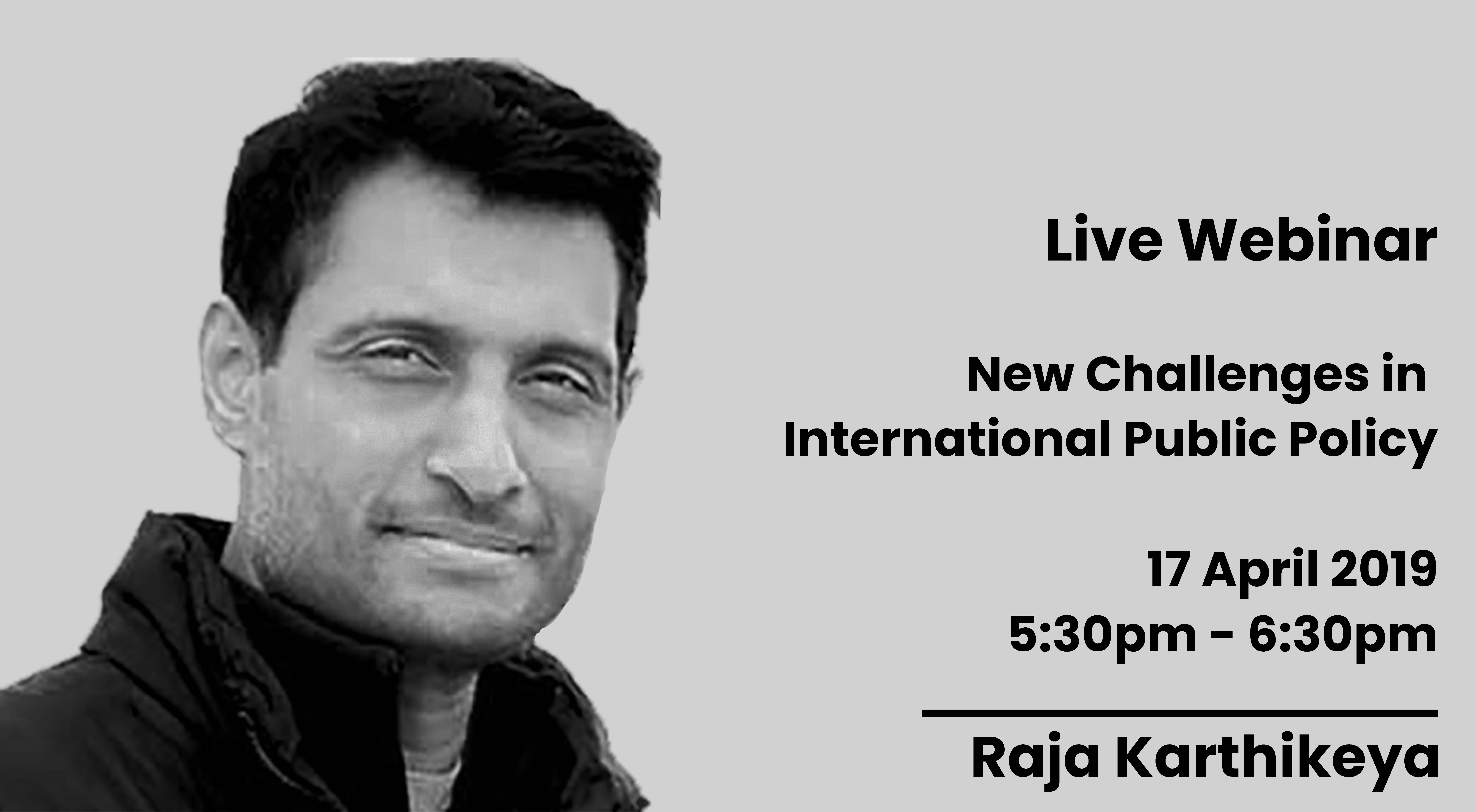 ISPP is organizing a webinar with Mr. Raja Karthikeya on the topic New challenges in International Public Policy.

Raja Karthikeya is a Political Affairs Officer in the United Nations Secretariat in New York where he works on the Middle East desk. He has previously served with UN political missions in Afghanistan and Iraq. His work has included mediation in inter-ethnic and inter-tribal land and water disputes, demobilization and reintegration, advising on sub-national governance, facilitating policing coordination, setting up transitional justice mechanisms, managing large technical assistance programs and facilitating the formation of a national unity government. He has written extensively about public policy and developmental challenges in India and on policy innovations to address them. His publications have included: a multi-sectoral strategy to address the Maoist insurgency, improving nuclear safety, enshrining Equality of Opportunity in the Indian Constitution, a Disaster Crisis response SOP for state governments, an employment insurance model and on Climate Change Adaptation. Passionate about cinema, he has written about the role that the Indian film industry could play in public diplomacy. He did his MS from Georgetown University’s School of Foreign Service and MBA from the Indian Institute of Foreign Trade.