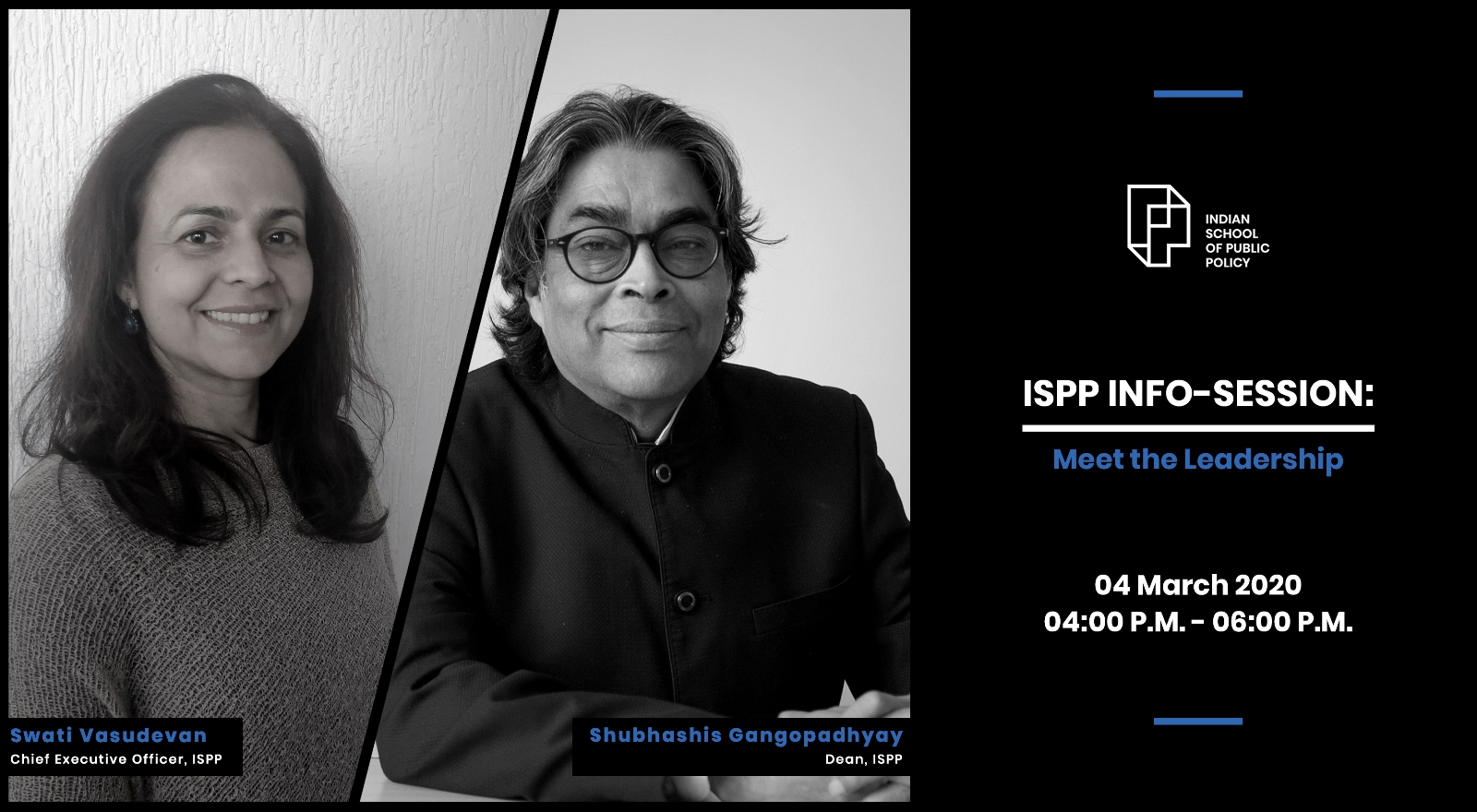 The Indian School of Public Policy (ISPP) is organizing an information session by the leadership team. The info-session will be presented by Dr.ShubhashisGangopadhyay (Dean, ISPP) and Swati Vasudevan (Chief Executive Officer, ISPP).

The session will cover important information about ISPP’s one year, full-time, Post Graduate programme in Policy, Design & Management. Information will be provided ranging from the curriculum to placements to admissions and student life. Grab this opportunity to meet the leadership team up, close and personal and get your questions answered by them. The info-session will be followed by high tea and a break-out session with the ISPP team. 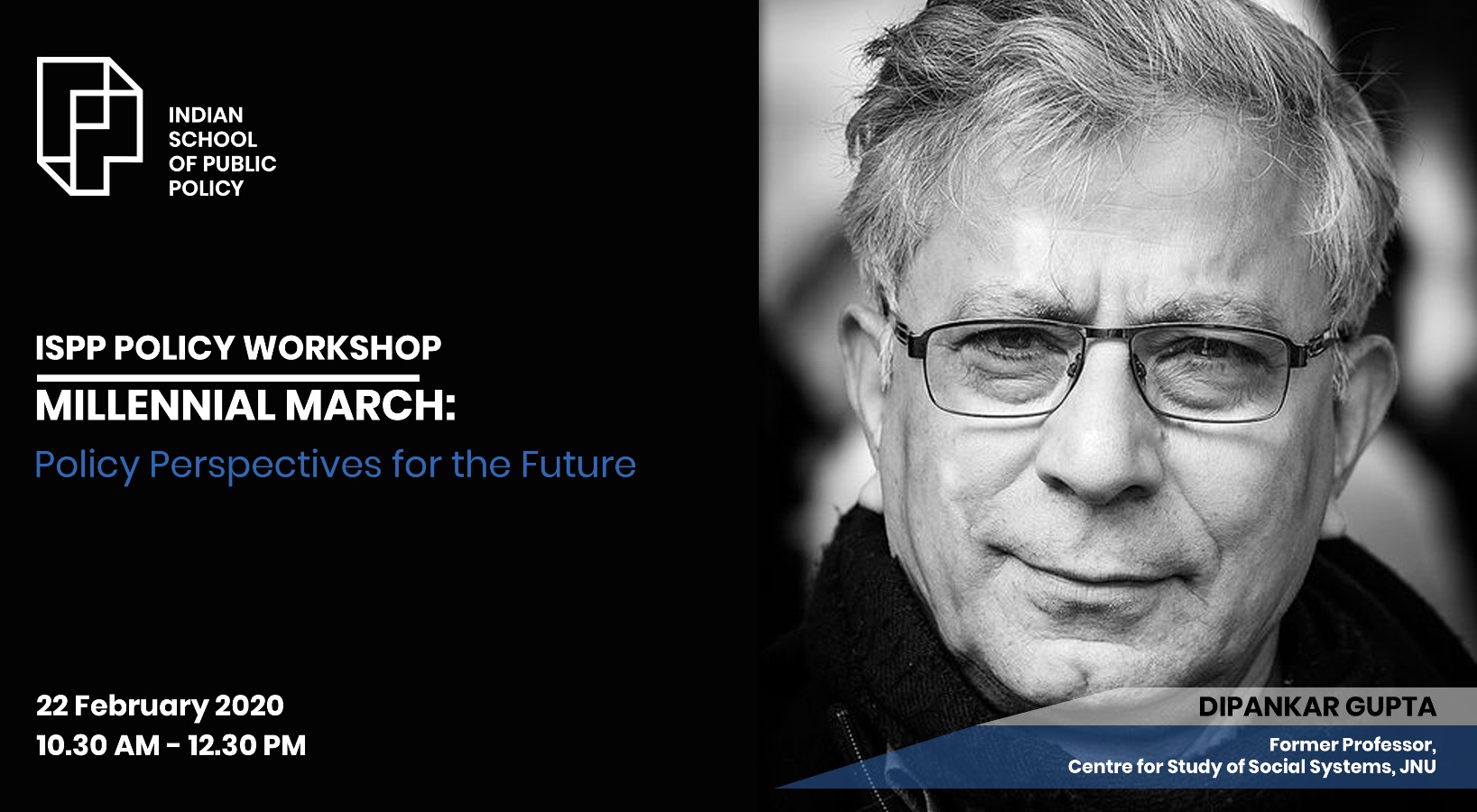 The Indian School of Public Policy (ISPP) is organizing a policy workshop by Dr. Dipankar Gupta on Millennial March – Policy Perspectives for the Future”. Registration is FREE of cost. However, we have limited seats. Therefore, pre-registration is mandatory.

Session Brief: “Given the massive transformations in rural India, the future of the Millennials lies in looking ahead with a perspective that breaks with the past. The rural economy needs to be appreciated in terms of a rural-urban nexus and the industrial sector must shed itself of its wariness with economies of scale. This would demand not just R&D investment but also a solid investment in education and health. Only then can we sustain the efforts needed to drive up  technology which constantly promotes greater productivity. Sociologically, it is clear that traditions and customs do not stand in the way of such policy drives and, in fact, there is an atmosphere now that would endorse them at the popular level. Most importantly, given the way in which cultures have shown themselves to be malleable, a lot depends on how the political elite can fashion policies that leave behind a past in order to step into the future, hand in hand with the Millennials.”

About the Speaker: Professor Dipankar Gupta, born on October 11, 1949, Ph.D., joined Jawaharlal Nehru University (JNU) in 1980 as a faculty member. In 2009 he opted for voluntary retirement after serving in the institution for nearly 30 years.Very recently, in 2007 he was Woodrow Wilson Scholar at the Woodrow Wilson Centre in Washington D.C., USA. In 2009 he was Visiting Professor in Deusto University, Bilbao, Spain. In 2011 he was invited to Queen’s University, Belfast, UK, as a Visiting Professor. Prior to this he has held several visiting Professorships and Senior Fellowships in universities in USA, UK, and Western Europe.In 1998 Professor Gupta started KPMG’s Business Ethics division in Delhi and led this practice for over five years. He is a member of several boards and editorial committees. He also has a regular column in Times of India, Mail Today and The New York Times. He has written or edited 17 books and published nearly 70 research papers.He has won several awards for his academic contributions. In 2010 the French Government honoured him as a Chevalier De L’Ordre Des Arts Et Des Lettres. 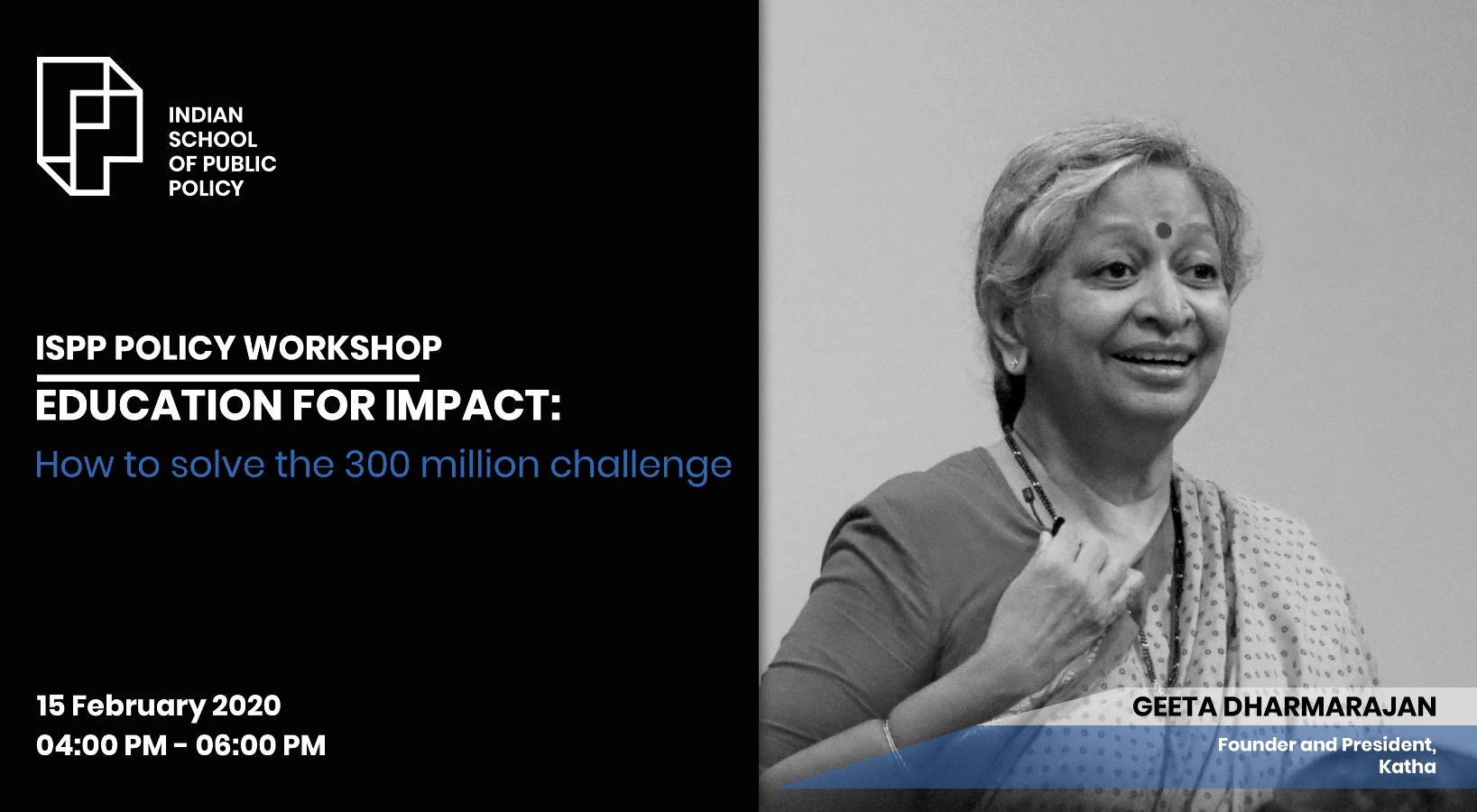 The Indian School of Public Policy (ISPP) is organizing a policy workshop by Geeta Dharmarajan on ‘Education for Impact : How to solve the 300 million challenge”. Registration is FREE of cost. However, we have limited seats. Therefore, pre-registration is mandatory.

Session Brief: India has 300 million children in schools today. Of this, 50% of children can not read. Dinosaurian curricula and classroom practices deaden the child’s natural inclination for story; as also their curiosity and ability to absorb new and BIG Ideas — the levers for critical thinking, problem-solving, and engaged learning. All children reading to achieve their potential is the urgent need for India. The workshop aims to discuss a disruptive strategy/plan that is quicker, cheaper, with greater reach into the interiors of India, for large scale impact. The solution must work for children learning in any mother tongues/school language. It should be easy to understand, easy to execute, easy to make into a habit, and easy to assess.

About the Speaker: Bio – Geeta Dharmarajan is a writer, social entrepreneur, and educationist. An award-winning writer for children and adults, she has over 30 years of professional experience having served at the India Today Group of Companies, The University of Pennsylvania and INTACH, before Katha. Her deep interest in how children and communities learn led to her starting Katha in 1988. Her sense of organizational design and pro-poor innovations are the driving force at Katha, and she has to her credit the creation of, inter alia, Katha’s unique story pedagogy and earth-friendly curriculum that help make children families into leaders. She believes that translation is a counter-divisive force in India and has made Katha a respected name in literary translation.