Agnipath: Drawing a fine line between Service and its perks 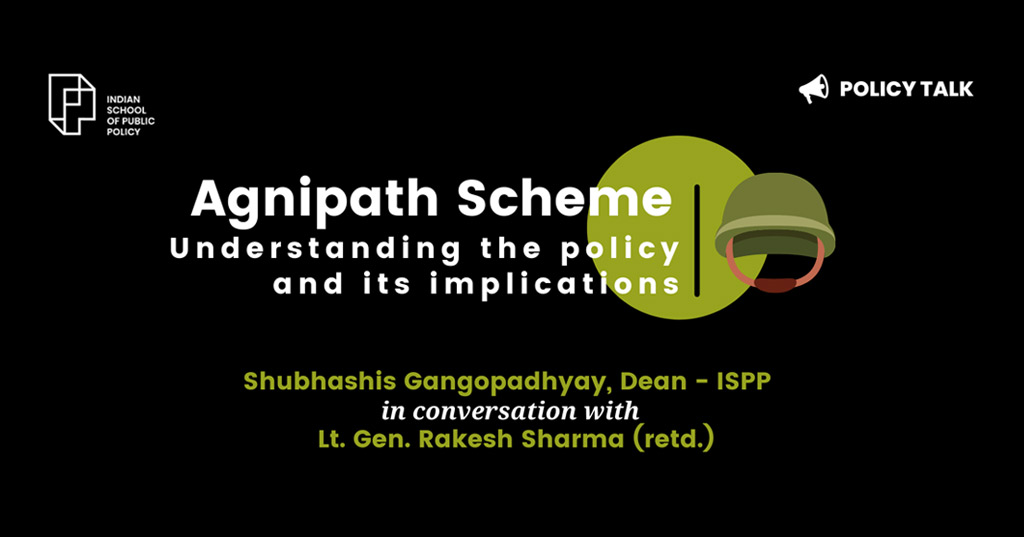 On 14 June 2022, the Government of India made an announcement about the Agnipath Scheme. When the ball was set rolling, unrest was witnessed across the nation. These agitations took a violent turn in some parts of the country. Due to the clouds of confusion around its implementation and effectiveness, a bisecting line could be seen among civilians and veterans alike.

This begs the question, with varied reforms already in place, what makes the Agnipath scheme so infamous? The answer can be found by understanding the recruitment system of the Indian Armed Forces.

The first way to get into the Army is through Short Service Commission. The duration of service is 10 years compulsory along with four years of extension (maximum). There are both technical (SSC Tech) and non-technical or CDS (OTA) entries. After completion of 14 years in SSC, the personnel have to work for six more years in permanent commission to avail of pension. Getting into permanent commission requires a good track record in the Annual Confidential Report. Aspirants who crack the UPSC CDS exam go to their training at the Officers Training Academy in Chennai. Their ranks start from Sipahi and go up to Subedar Major (in the case of the Army).

The second and permanent commission includes 20 years of compulsory service. The entries are either after the 12th standard or after completing an engineering degree (TGC, AGC). The personnel have to complete 20 years of service to avail of pension. The aspirants who crack the UPSC NDA exam go for their training at National Defence Academy in Khadakwasla, Maharashtra. After allocation of service branches, they go to their respective training schools including the Indian Military Academy in Dehradun, Uttarakhand, the Indian Air Force Academy in Dundigal, Telangana, and Indian Naval Academy in Ezhimala, Kerala. Their ranks start from Lieutenant and go up to General (in the case of the Army).

As of now, the Short Service Commission has been replaced by Agnipath. The permanent commission remains unaffected.

According to the notification, aspirants of the age group 17.5 to 21 years are eligible under this scheme. The age limit has been raised from 21 to 23 for the current recruitment year.

Initially, a Jawan’s salary was Rs. 30,000 for a long period of time but with Agnipath, the salary would increase to Rs. 40,000 in the fourth year. An MOU has been signed with IGNOU to provide a bachelor’s degree to all Agniveers. They will get about Rs. 11.71 lakhs (50-50 contribution by Jawan and the government) at the time of retirement. Apart from this, Agniveer can also take a loan of up to Rs. 18 lacs for three years. There is a life insurance cover of Rs 48 lakhs. A one-time compensation of 44, 25, and 15 lakhs for 100 percent, 75 percent, and 50 percent disability respectively with increased wages and a multitude of other benefits. (As shown in the table) 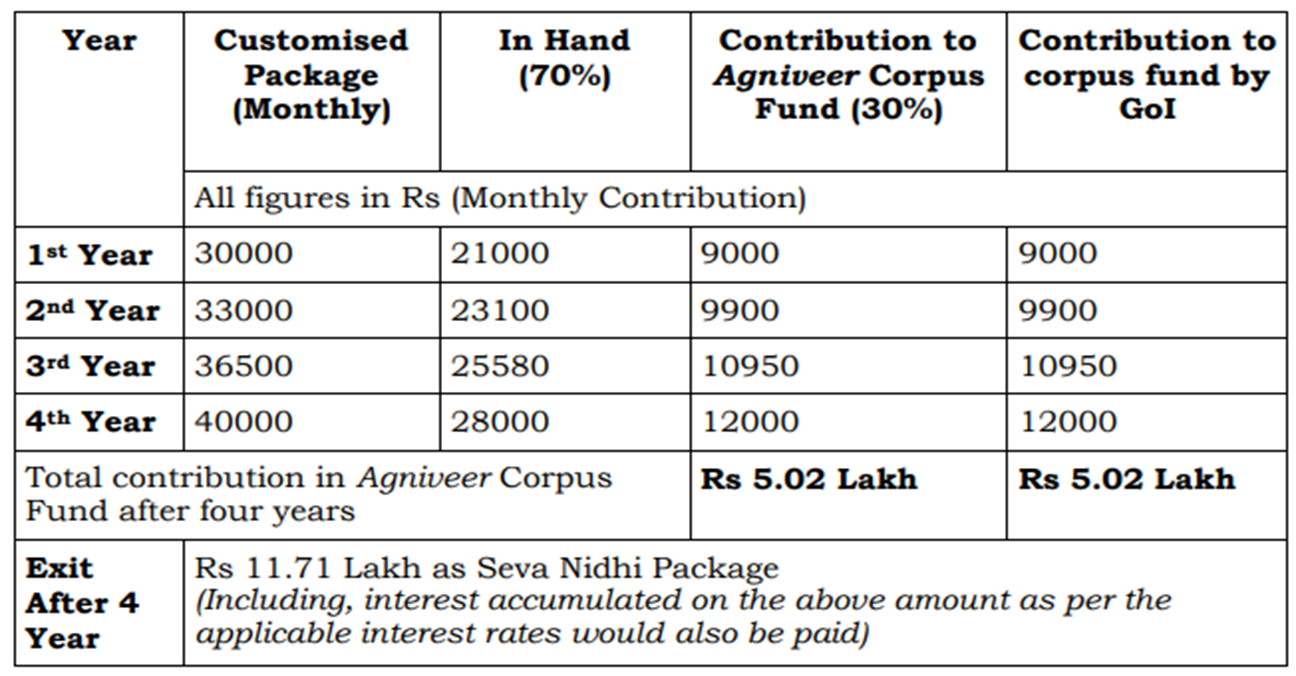 Why is the youth protesting?

A deeper analysis of the scheme reveals that only 25 percent of Jawans will be absorbed in permanent commission and remaining 75 percent Agniveers will be rendered jobless at that instant. Now, 25 percent of retained Jawans will serve for more 11-13 years and the remaining will be sacked with no pension and medical benefit. Some factors such as limited job security and a lack of pension might demotivate aspirants as they will be in constant fear of being financially insecure. In this four-year tour of duty, six months will be reserved for training and furthermore, they will be entitled to eight and four months of annual and casual leaves respectively, all of this adds up to 18 months. This means Agniveers will be operational only for 30 months.

Moreover, our nation faces unfathomable threats and challenges from some of our neighbouring countries. The Galwan skirmishes, increased violence in the Kashmir valley, and Chinese intrusion in the northeast among others have already engaged much of the military. With all these prevailing hostilities, this new scheme seems to be ill-timed.

As pointed out by many veterans, six months of training is not sufficient for Agniveers to operate complex military technology such as missile systems, submarines, and air commands. Prior to this, SSC jawans were trained for 1.5 years in the case of the Army, three years for the Navy, and six years for the Air Force.

Based on calculations, absorbing one-fourth Agniveers and paying 11.71 lakhs to the rest means only Rs. 3,710 crores or 0.70 percent of the current defence budget will be saved.

Although the regimental system is a colonial award, the talk of All India All Class recruitment has had veterans baffled, as there was no drawback with the status-quo. Instead, regimental pride acted as a good motivational factor for the forces.

India’s defence budget is nearly five lakh crores, and includes pensions, salaries, and food supplies, which is on the receiving end of a major cut (3-4 lakh crores). This means that fewer resources are left for modernisation purposes. This foresighted approach means the defence budget will not be increased, and hypothetically if it is increased, the health and education sector will become more fund-starved. The idea is to get maximum output from a minimum budget.

The concept of national security is very dynamic. With the dawn of a new technological era, every country is racing towards a more automated and agile military. Implying our preparedness for yesterday may not be sufficient today, as modernisation is the need of the hour.

Earlier SSC jawans used to retire at 32 years of age as a family man, but now Agniveers will retire at 21-25 giving them the flexibility to switch careers and even fund their education by the lump sum received.

It is a kind of paradox that India, having the youngest population, has one of the oldest people serving in the Army. The current average age of the Army is 30+. After the implementation of the Agnipath scheme, it will come down to 25/26.

With arguments on both sides on the table and the right to peaceful protest being a fundamental tenant of democracy, the government should act swiftly and justly to address the protestors’ concerns.

By Harshpreet Singh
Class of 2023