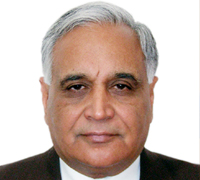 Lt. Gen. (Retd.) Shamsher Singh Mehta, PVSM, AVSM and Bar, VSM was commissioned into 63 Cav in the Army in 1962, he led the only tank column to reach Dacca on 16 December during the 1971 War for the Liberation of Bangladesh. His command and staff assignments range from being a DS at DSSC, MA to Gen Sundarji COAS, command of 1 Armd Div, ADGMO, GOC 2 Strike Corps, and DCOAS (P and S) at AhQ.

He was Army Commander, Army Training Command. Later, during Operation Prakaram, he held the prestigious appointment of General Officer Commanding in Chief, Western Command from 2002 to 2004.

He was Principal Adviser to the Confederation of Indian Industry (CII) from 2004, and it’s Director General from May 2006 to April, 2008. During his tenure, he conceptualised and launched the ‘SKILL INDIA’ initiative and facilitated India’s entry to WORLD SKILLS’ INTERNATIONAL.

He was a Member of the National Security Advisory Board from 2004 to 2006. He is on the board of the Indian Council of World Affairs, and a Trustee of the Tribune Trust, a National Daily published from Chandigarh.

He is on the Board of Educational institutions and an Independent Director with Corporate houses. He is a Visiting Speaker on Leadership and Strategy to corporate and military establishments.