The Issues With the Rehabilitation Policy of Kashmiri Migrants 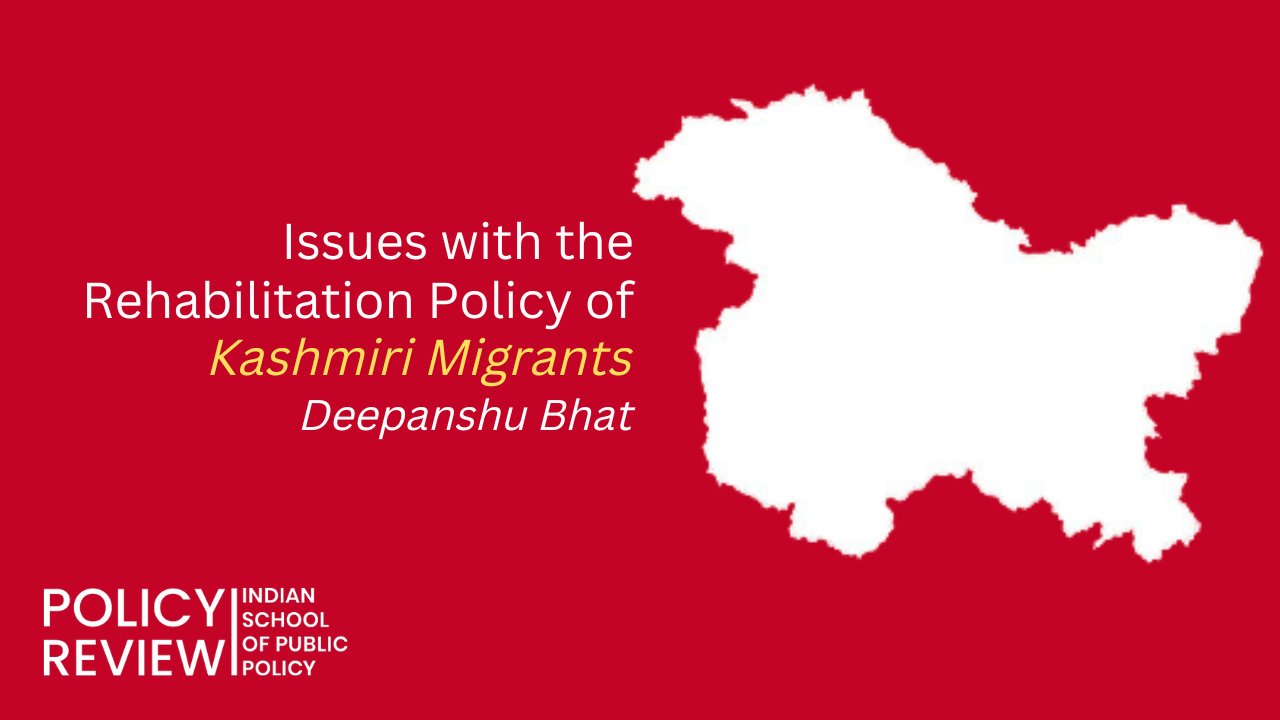 With the onset of militancy in Kashmir during 1989-1990, many Kashmiris had to migrate from the valley to Jammu and areas. According to the data from the Department of Relief and Rehabilitation, Government of Jammu and Kashmir, 44,167 registered migrant families live in Jammu. Amongst them, 39,868 are Kashmiri Pandit families, 2,574 are Kashmiri Muslim families, 1,642 are Kashmiri Sikh families, and seventy-eight belong to other religions.

In 2008 during UPA-2, then PM Manmohan Singh introduced “The Prime Minister’s Comprehensive Economic Package’’ popularly known as PM Package for Kashmiri Migrants. This policy was one of the most significant steps by the Government to rehabilitate the Kashmiri migrants back in Kashmir.

The aim of the policy was the rehabilitation of Kashmiri migrants through the economic route. The policy’s objective was to provide employment and confidence-building measures for Kashmiri migrants in Kashmir so that employees would settle back in Kashmir with their families.
While the policy is holistic progress has been quite languid. It took almost 14 years, from 2008 to 2022, for the successive governments to employ 5928 migrants out of 6000 vacancies. It is important to note that these jobs were supernumerary in nature, and the employees do not avail benefits of permanent employees. Employees received no promotions and incentives until June 2022. But after a spate of targeted killings in Kashmir and subsequent protests by Kashmiri migrants. the advisory council of Jammu and Kashmir devised an additional scheme to prepare a seniority list for promotions and incentives.

Employer and employee of non-transferability means the Kashmiri migrants who get employment under the said package will not be transferred from their districts. This agreement was signed so that the employees could keep serving in their ancestral districts, which would build confidence and reconciliation.

In 2022, there were 25 targeted killings of migrants and minorities in Kashmir, which amplified the sense of insecurity among Kashmiri migrant employees. This led to widespread protest in the state as the employees demanded their relocation from Kashmir to safer places and abrogation of the non-transferability clause.

The monthly monetary relief support of Rs. 13,000/month for each Kashmiri Migrant family is inadequate for the subsistence of the entire family. With the price rise of essential commodities, an average migrant family is facing difficulty meeting their day-to-day needs. The migrant community is also demanding an increase in monetary support from Rs. 13,000 to Rs. 20,000 per month per family.

Therefore, there seems an immediate need to reconstruct the rehabilitation policy. But this should be done taking into account the security situation of Kashmir and taking different stakeholders into confidence.

We can observe a wide gap between the policy’s provisions and its success on the ground. It is essential to understand that the security apparatus of Kashmir is critical to the policy’s success. The process has to be decentralized as currently the procedure is formulated by the Ministry of Home Affairs. The reconstruction should be done either by the state government in coordination with the urban local bodies of Kashmir or by the Department of Relief and Rehabilitation. There is a need to understand the requirements and issues of Kashmiri migrants and consider the situation in Kashmir.

The government should scrap the transferability clause and relocate the employees to safer places until the targeted killings are brought under control. The policy should also initiate a new employment package as the figure of 6000 for 14 years is insufficient for complete rehabilitation.

The construction of safer transit accommodations should be taken on a priority basis. The aim of the Government should be to accommodate every employee. No employee should be left to rent a place far away from their place of work. . In light of high inflation, the monetary relief support should be increased immediately.

The Government should set up an interlocutor’s commission to mediate between the Government and the migrant community. Such a commission will ensure dialogue and discussion with stakeholders so that changes in the reconstructed policies have the consent and approval of the community itself.